The Egyptian government has approved Eatco Petrochemical’s (Cairo) $1.4-billion olefins and polyolefins project at Damietta, Egypt. Eatco says it is looking for partners for the project, which will use a new methanol-to-olefins (MTO) technology developed by UOP and Norsk Hydro. Eatco will convert methanol to ethylene and propylene, which will be supplied to plants with capacity for 300,000 m.t./year of polyethylene and 200,000 m.t./year of polypropylene. Eatco says Dow Chemical, Chevron Phillips Chemical, and Basell are competing to supply polyolefins technology. Eatco adds that it is close to appointing a financial advisor.

The MTOTM methanol to olefins process, developed by UOP and HYDRO of Norway, provides an economical means to convert methanol to olefins, primarily ethylene and propylene. Ethylene and propylene are in increasing demand worldwide and have significant financial value in the marketplace. With its higher yields, the MTO process is more economical than older  technologies for indirect conversion of methane to higher value products.

INTRODUCTION  Changing natural gas into olefins is a two-step process

APPLICATIONS
The UOP/HYDRO MTO process can be utilized in locations with cheap, abundant natural gas reserves. By integrating the UOP/HYDRO MTO process into a gas to olefins (GTO) complex, feedstock prices can be held down and natural gas can be converted into a form that is more easily transported and of higher value. Existing naphtha or ethane-propane cracker facilities can increase olefin production and feedstock flexibility by installing an MTO reactor section and feeding into a revamped cracker fractionation section to minimize capital investment. Because the UOP/HYDRO MTO process produces a rich olefinic effluent containing low quantities of paraffins, the existing fractionation equipment can often be easily debottlenecked to handle the additional olefins produced. Yet another application would be downstream of an existing methanol plant with excess capacity, to meet local demands for olefins and polyolefins.

DESCRIPTION
In the UOP/HYDRO MTO process, crude methanol is converted primarily to ethylene and propylene. The process can work in either a maximum ethylene or a maximum propylene production mode. The approximate purified hydrocarbon product stream compositions, on the basis of wt%, are shown below for both operating modes. By changing the reactor operating severity, the UOP/HYDRO MTO process user can switch between operation modes as market demands dictate.
Long-term methanol conversion of 99.8% and stable product selectivity have been demonstrated at HYDRO’s large process demonstration plant in Norway. This plant circulates and regenerates catalyst continuously and uses crude methanol as a feedstock at a rate of more than 0.75 MT per day.
The UOP/HYDRO MTO commercial process utilizes a fluidized bed reactor with a continuous fluidized bed regenerator. This technology is an extension of UOP’s established FCC commercial technology. 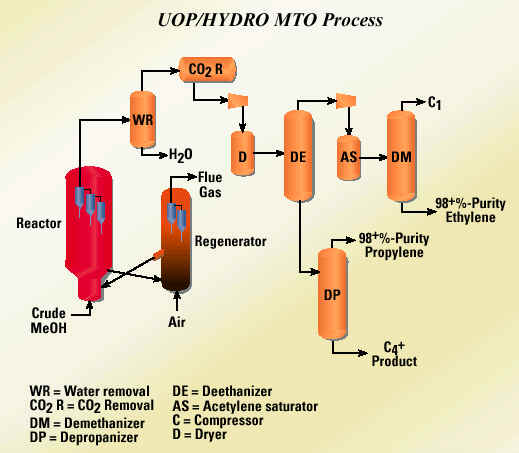 The reaction is catalyzed by the MTO-100 silicoaluminophosphate synthetic molecular sieve based catalyst. The catalyst has demonstrated the degree of attrition resistance and stability required to handle multiple regenerations and fluidized bed conditions over the long term. The catalyst is extremely selective toward the production of ethylene and propylene.